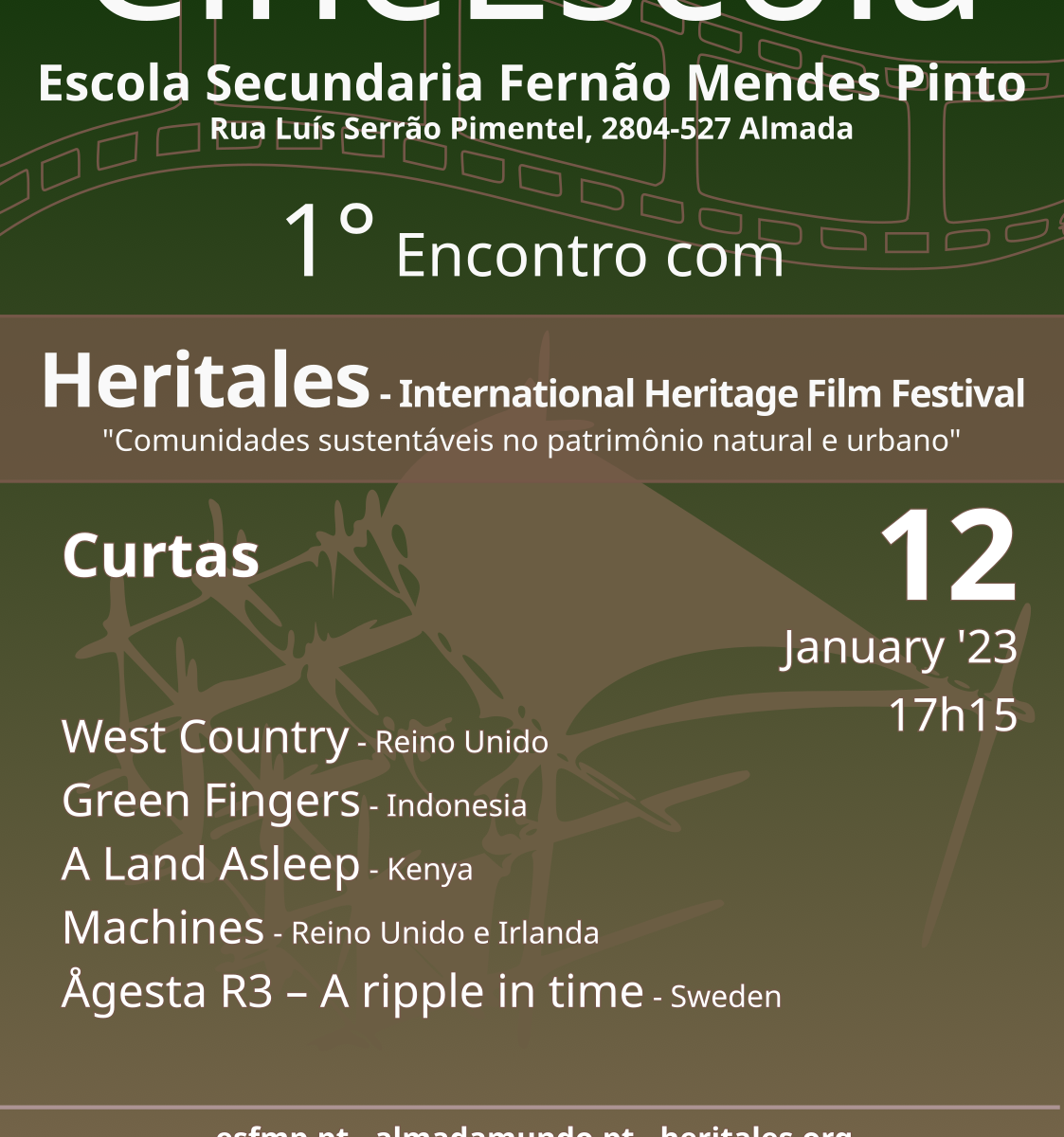 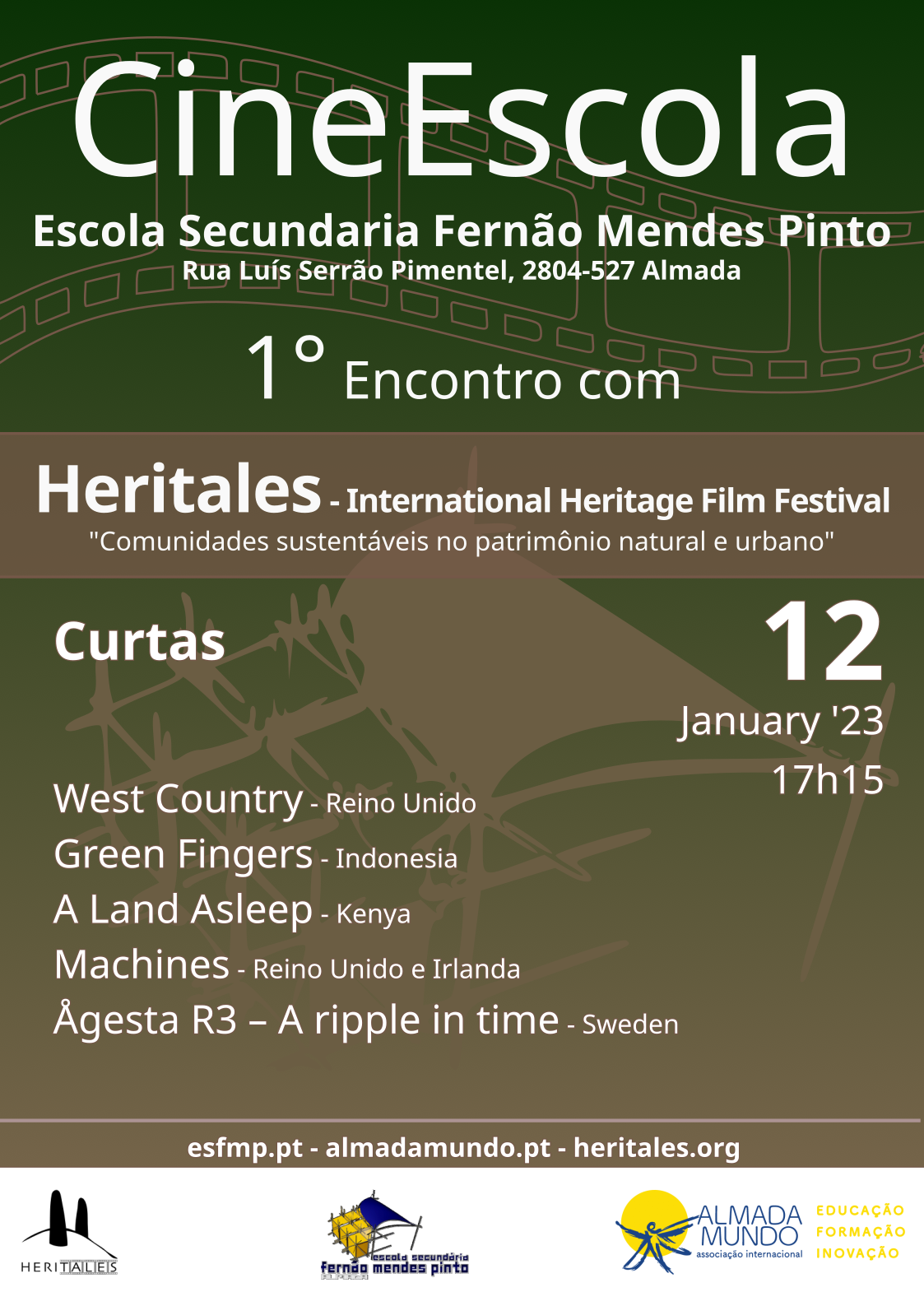 Heritales in collaboration with the association Almada Mundo and the Escola Secundaria Fernão Mendes Pinto   is honored to present a amazing evening with 5 documentaries that participated at the 2022 competition, one of which achieved an honorable mention. The event is restricted to the student of the school but if you any particular interest to the films, do not hesitate to contact us.

More info about the film A Land Asleep

More info about the film Machines

More info about the film Ågesta R3 – A ripple in time

Heritales in collaboration with the association Almada Mundo and the Cultural Centre Fernão Mendes Pinto   is honored to present an amazing evening with the documentary that partecipated at the 2022 competition: “Mamody the Last Baobab” from director Cyrille Cornu . We invite all the local communities and passionate about heritage documentary to partecipate to the evening screening in the amazing setting of the Cultural Centre Fernão Mendes Pinto,  next to the statue of the Christo Rei in the city of Almada (South of Lisbon).

More Info about the film Mamody the Last Baobab Digger 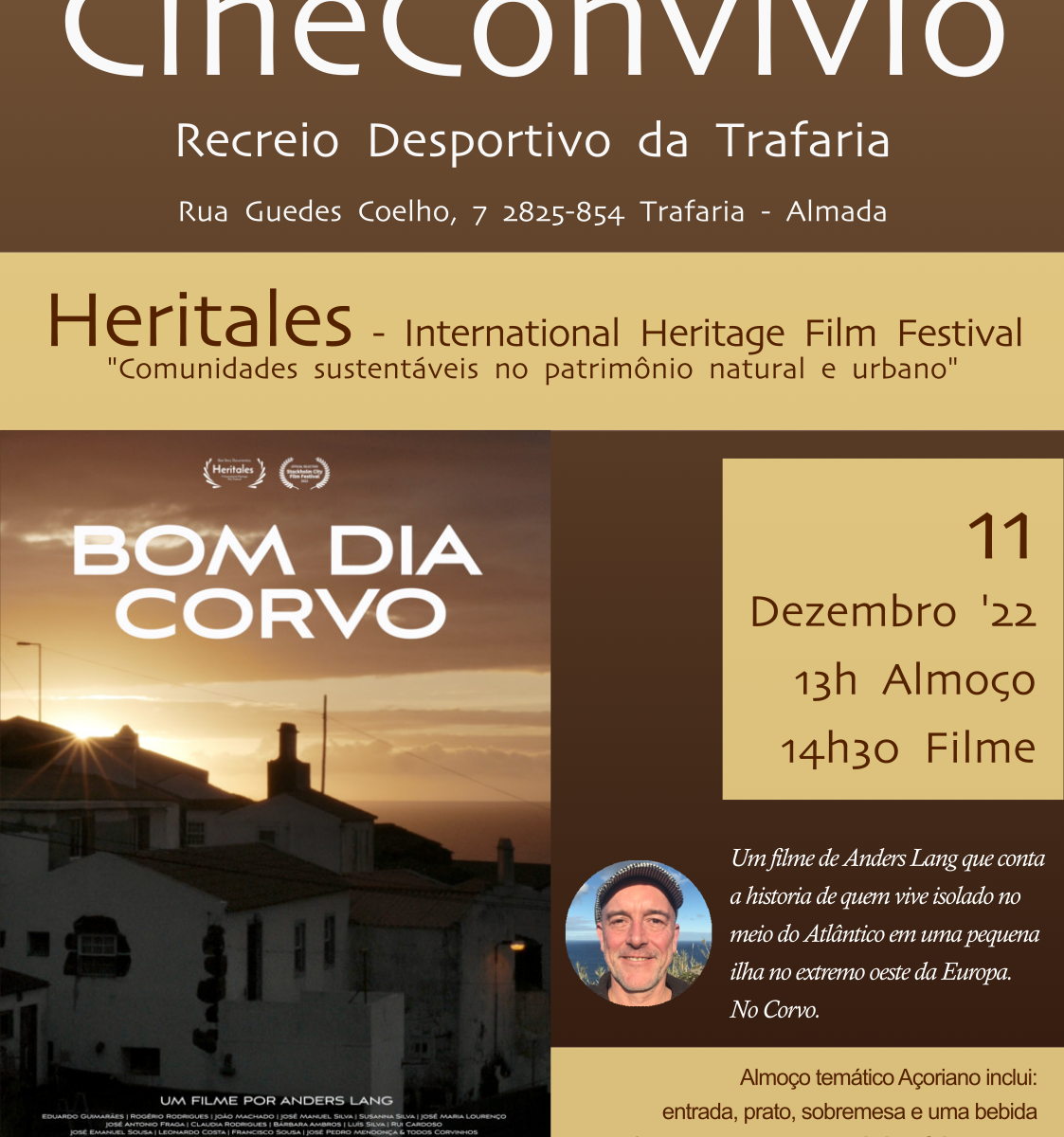 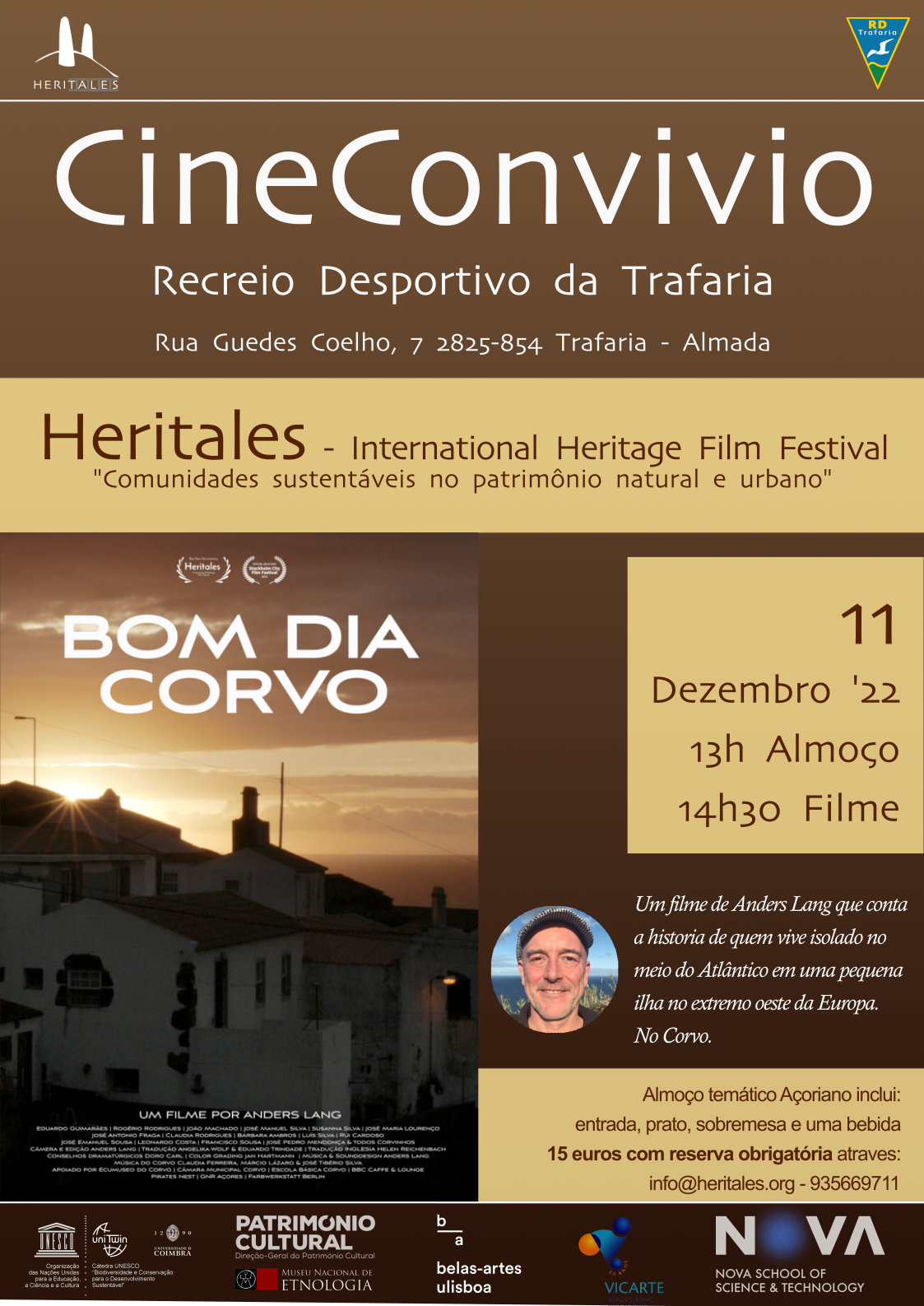 Cinema in the Casino

Once again we invite you  to come and join us at the Recreios Desportivos da Trafaria  with fantastic cinema and ethnic food event from Corvo Island. Come celebrate with us an afternoon of moving images, food, culture and traditions of the Portuguese Atlantic Heritage of the Azores.
The film “Good morning Corvo” by Anders Lang was awarded the prize for best story in the 2022 edition of the Heritales International Heritage Film Festival.

Please join us on  this magic Sunday afternoon in one of the most beautiful setting on the South of  Lisbon. The old Casino of Trafaria, on the river Tagus will host this event and it will welcome you in its beautiful renewed premise.

More about the film

EcoMuseum Zagori was founded to manage the protection and exploitation of the natural and cultural heritage of the area to the benefit of local development. The central principle it is based on is that an area’s monuments should remain in situ as a living testament to a specific era. Here visitors learn about various aspects of social life, production processes and the socio-economic and natural history of the region. At the same time, they are given the opportunity to interpret the spiritual, social and economic evolution of the local population which is directly connected to the natural environment and its effect on the definition of its identity..

This young delegation is based on a group of associates, faithful to the principles of the ASSP, since its implementation in the district in the 80’s. With the increasing number of associates, we have reached the realization of a dream – the Teacher’s House of the District of Évora.
At the Teacher’s House in the Évora district, there is a whole range of activities that are intended to be rich and innovative. They should enrich the offer to associates and friends and make the space profitable, creating a new dynamic with the community. 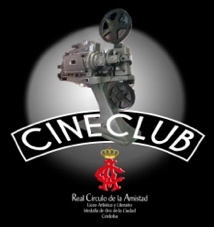 The Real Circulo de la Amistad social headquarters, founded on May the 31st 1854, is located in the former Agustinas Recoletas de Nuestra Señora de las Nieves convent (16th century). In 1964 it received the first gold medal of the City Council. On March 31st 2006, His Majesty the King Juan Carlos I conceded to this entity the title of “Royal”.
Since it was founded, due to its continuous activity and presence, it has always been cultural crucible of the town by realizing permanents social and cultural acts. Its patrimony is composed, among others, by paintings from Julio Romero de Torres, José Fernández Alvarado, José María Rodríguez de los Ríos Losada, Carlos Ángel Díaz Huertas, Joan Miró, Equipo 57, Ginés Liébana, etc.
Visitable rooms
The senses hall: Pictures dedicated to “The Five Senses” are shown in this room. These pictures, which were made by the cordobesian painter and illustrator Carlos Ángel Díaz Huertas (1866-1937), are a whole demonstration of pictoric genius, nature knowledge and perfection of drawing. On December 13 1844, a concert of the Hungarian pianist and composer Franz Liszt was celebrated in this hall, when it still belonged to the Liceo Artístico y Literario. Twelve years later the Liceo will join the merging association of the Círculo de la Amistad.
Library: One of the Círculo de la Amistad treasures is its centenary Library, opened on January 16th 1901. It´s noble furniture was made by the cordobesian sculptor Mateo Inurria in the beginning of the 20th century. Is really remarkable the book collection from the 16th. 17th and 18th century among more than 25.000 copies. One of these shows the list of assistants to the Andalusian regional assembly, which was celebrated in Liceo Hall, where the Base Draft Bill for Statute of Autonomy was approved in 1933.
The Liceo Hall: Was opened in 1867. It´s spectacular chandeliers and lights provide the hall with such luminosity the great paintings are highlighted. The ceiling of the room, decorated with paintings from Rodríguez de Losada and Fernández Alvarado was the ideal location for high society parties, ballroom dances and floral games.
It has received several remarkable visitor from the world of arts, culture and politics such as: Prince Humberto I, Prince of Wales; Alfonso XII, Ulysses Simpson Grant, Isaac Peral, Juan Valera, Alfonso XIII, Blas Infante, Alexander Fleming, Juan Carlos I and Sofía from Greece when they were Princes of Asturias in 1970, etc. . 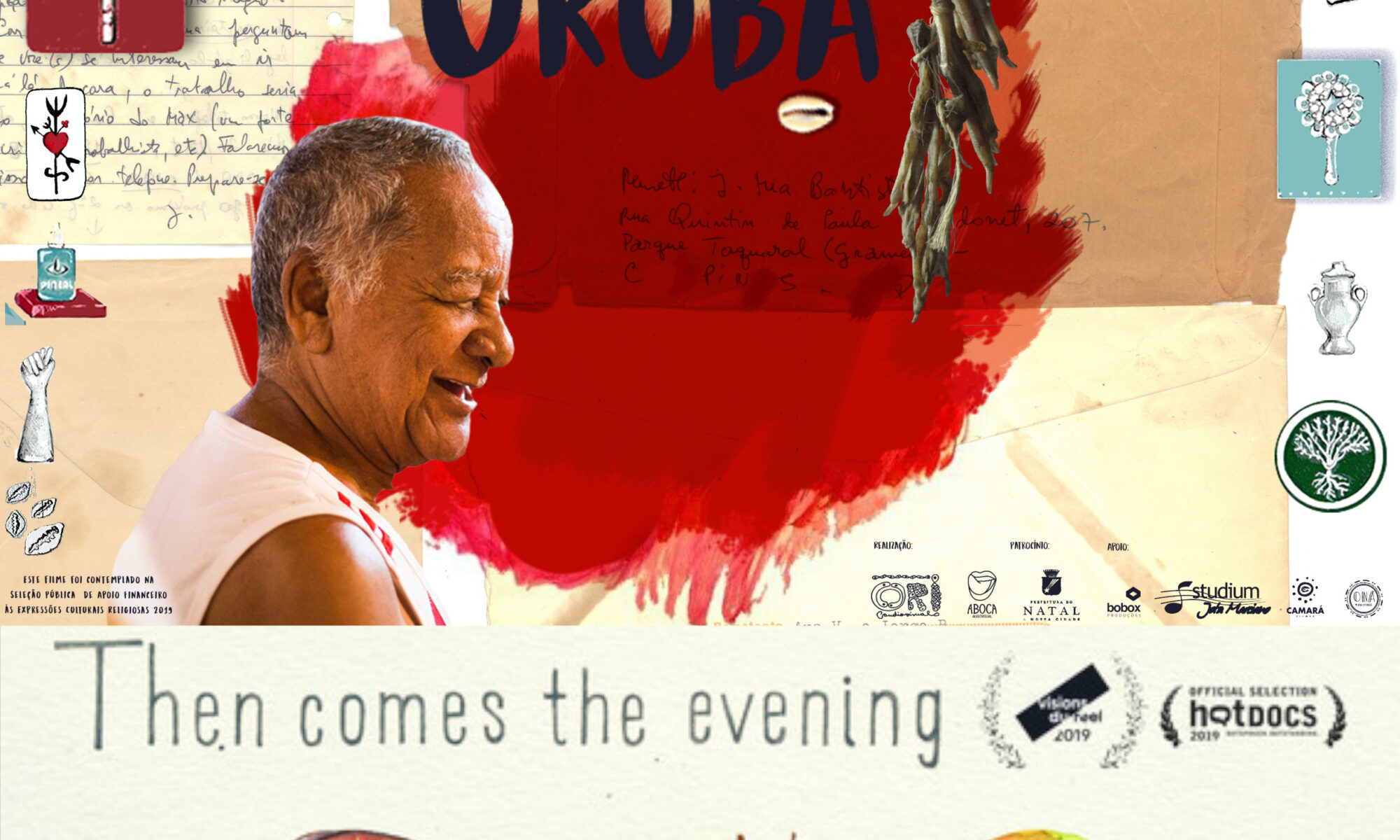 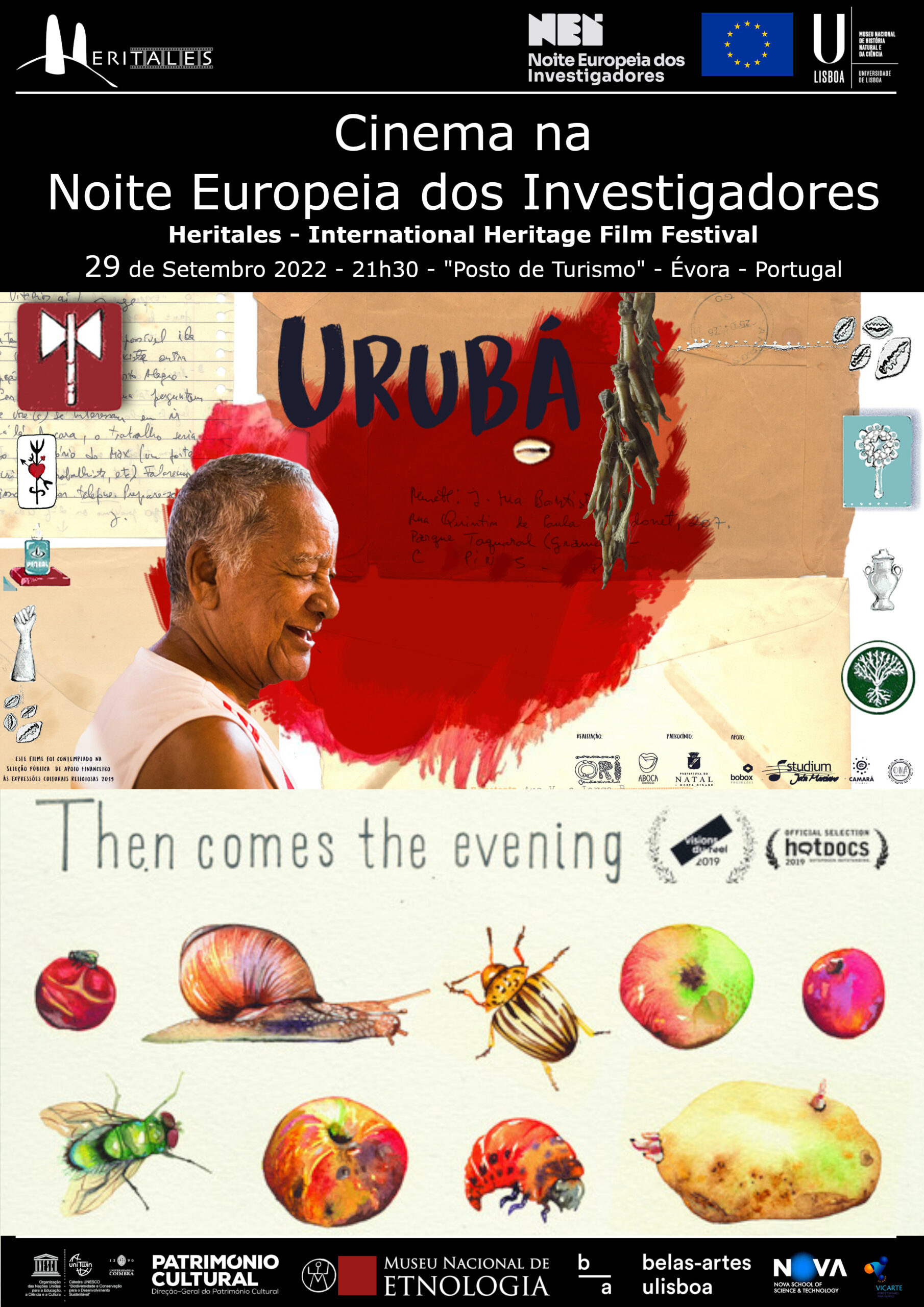 Uruba’ & Then Comes The Evening

Heritales in collaboration with the European Night of Researchers is honored to present two amazing recently awarded documentaries Uruba’ from director Rodrigo Sena and Then Comes The Evening from director Maja Novaković . Join us for this magic night in the Praca Giraldo in the city of Évora-Portugal (UNESCO World Heritage Site).

More Info about the film Uruba’

More info aout the film Then Comes The Evening 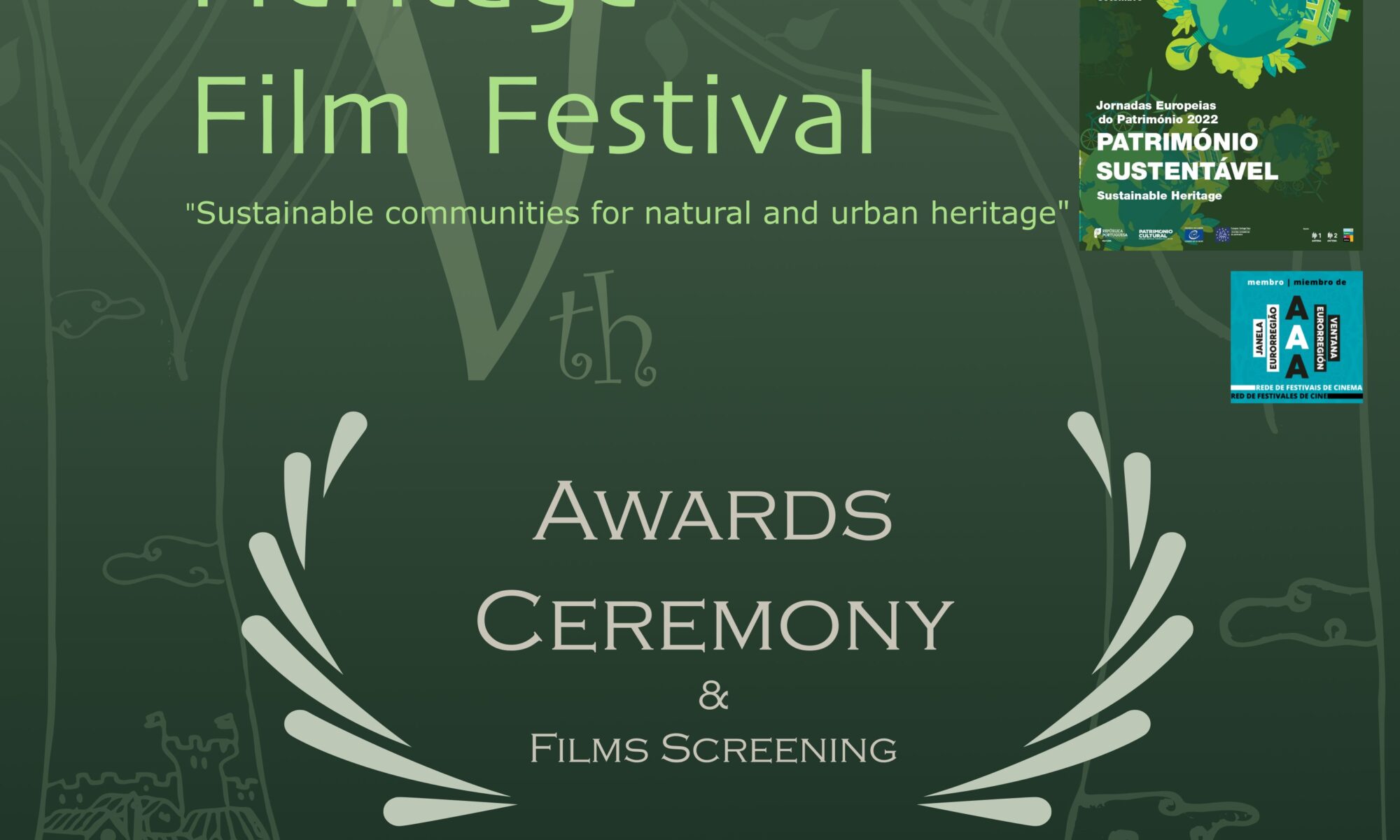 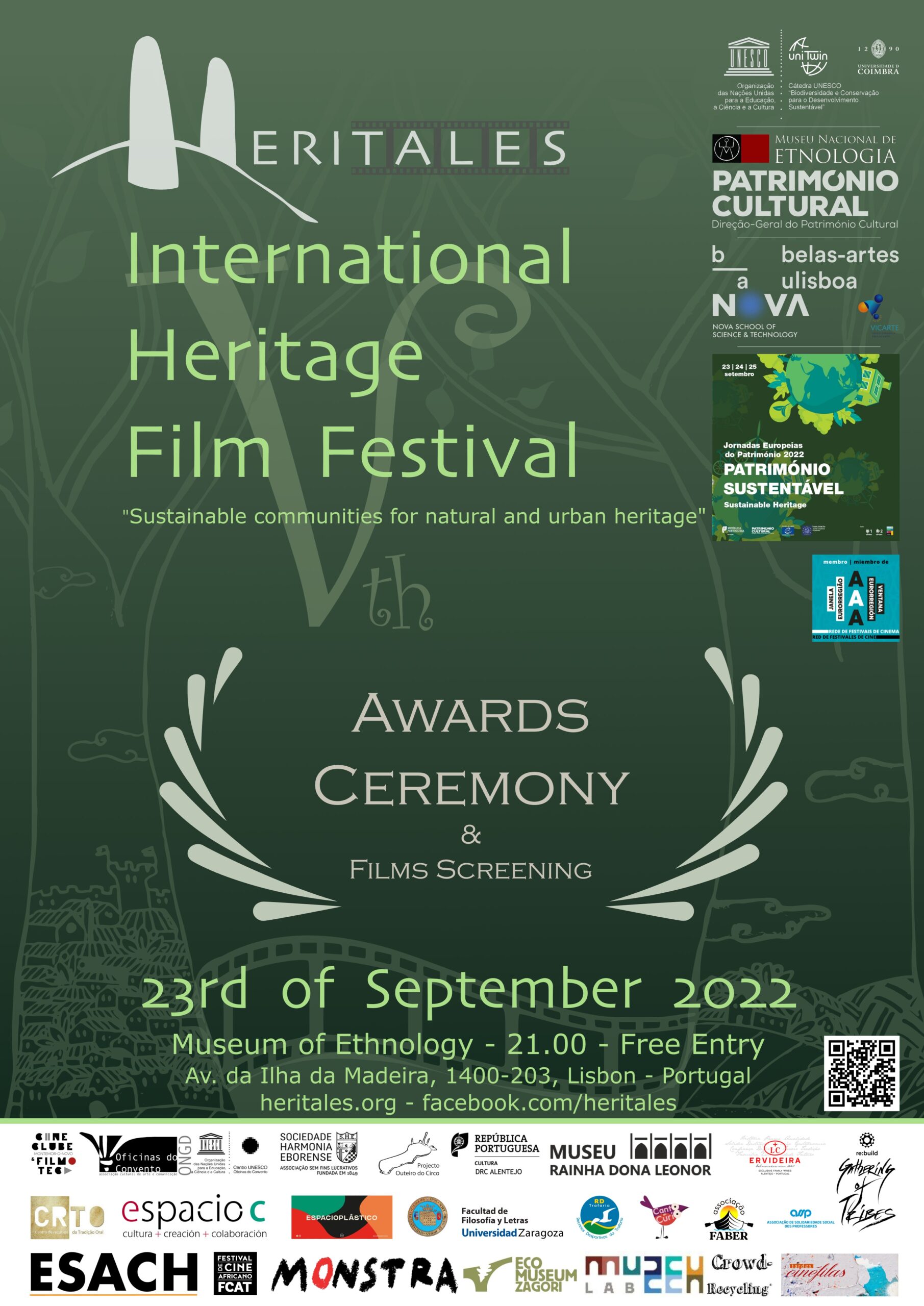 Heritales celebrates the awards ceremony of the 2022 competition. We would like to invite all our fans for a night of films about Natural and Urban Heritage. The event will take place at the  National Museum of Ethnology in Lisbon.

This year we are going to explore amazing work from all over the world that showes “sustainable communities for natural and urban Heritage”, inline with the theme of  2022 edition of the JEP (Heritage European Days) Sustainable Heritage 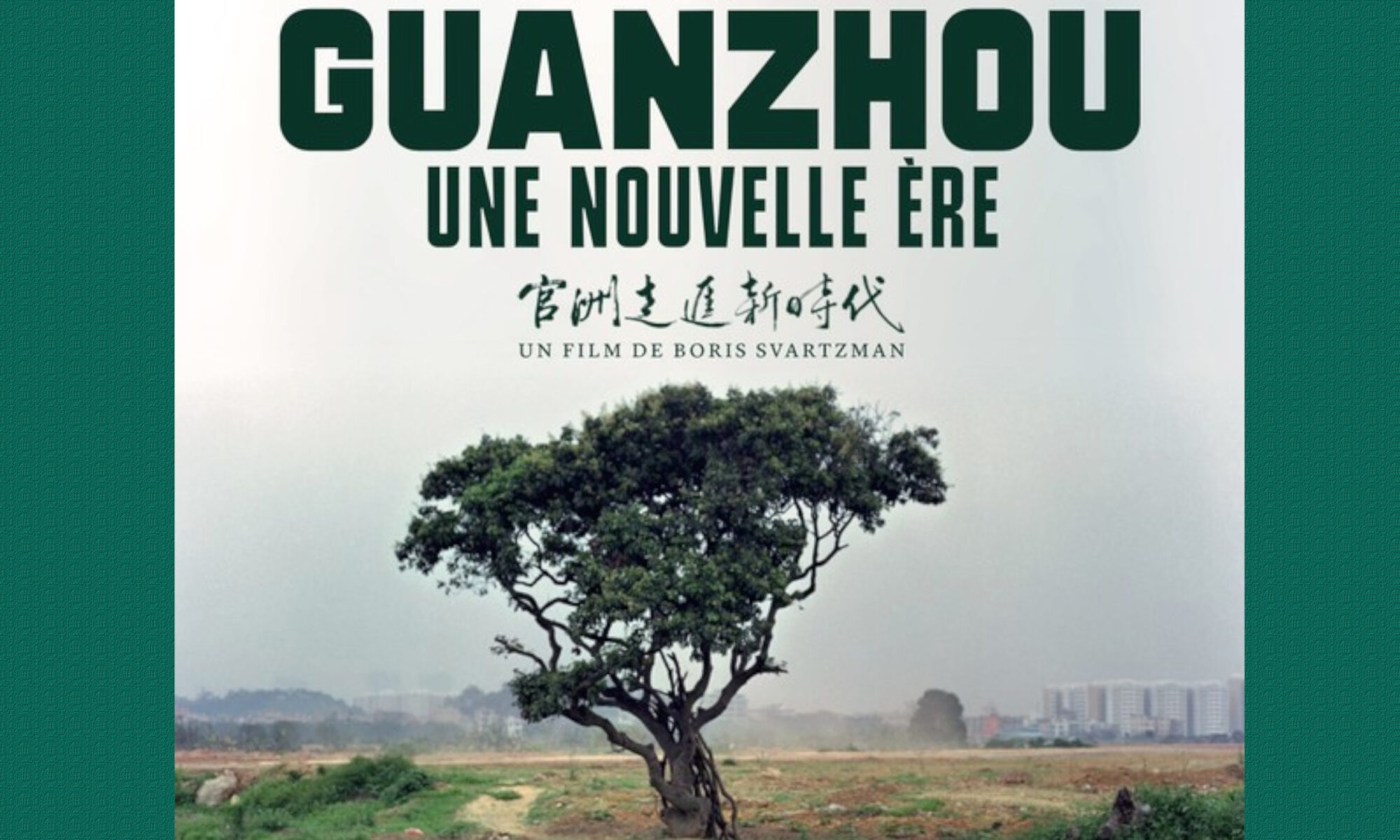 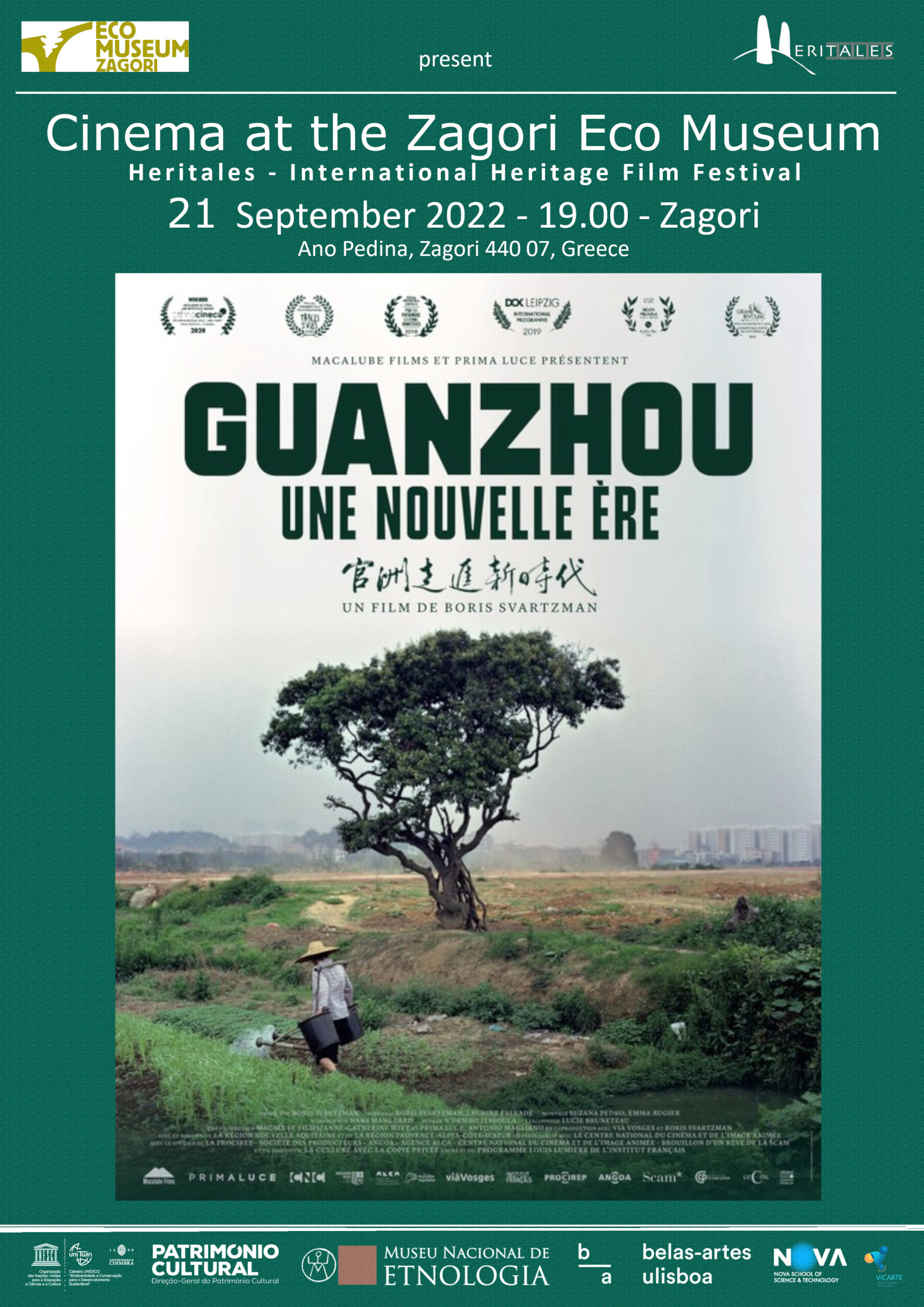 The Heritales has the honor to invite you to the session organized in collaboration with the Zagori Eco-Museum, the documentary film  entitled “Guanzhou, a new era” in competition at the V Edition will be screened in the amazing settings of Zagori in Greece.

More Info about the film 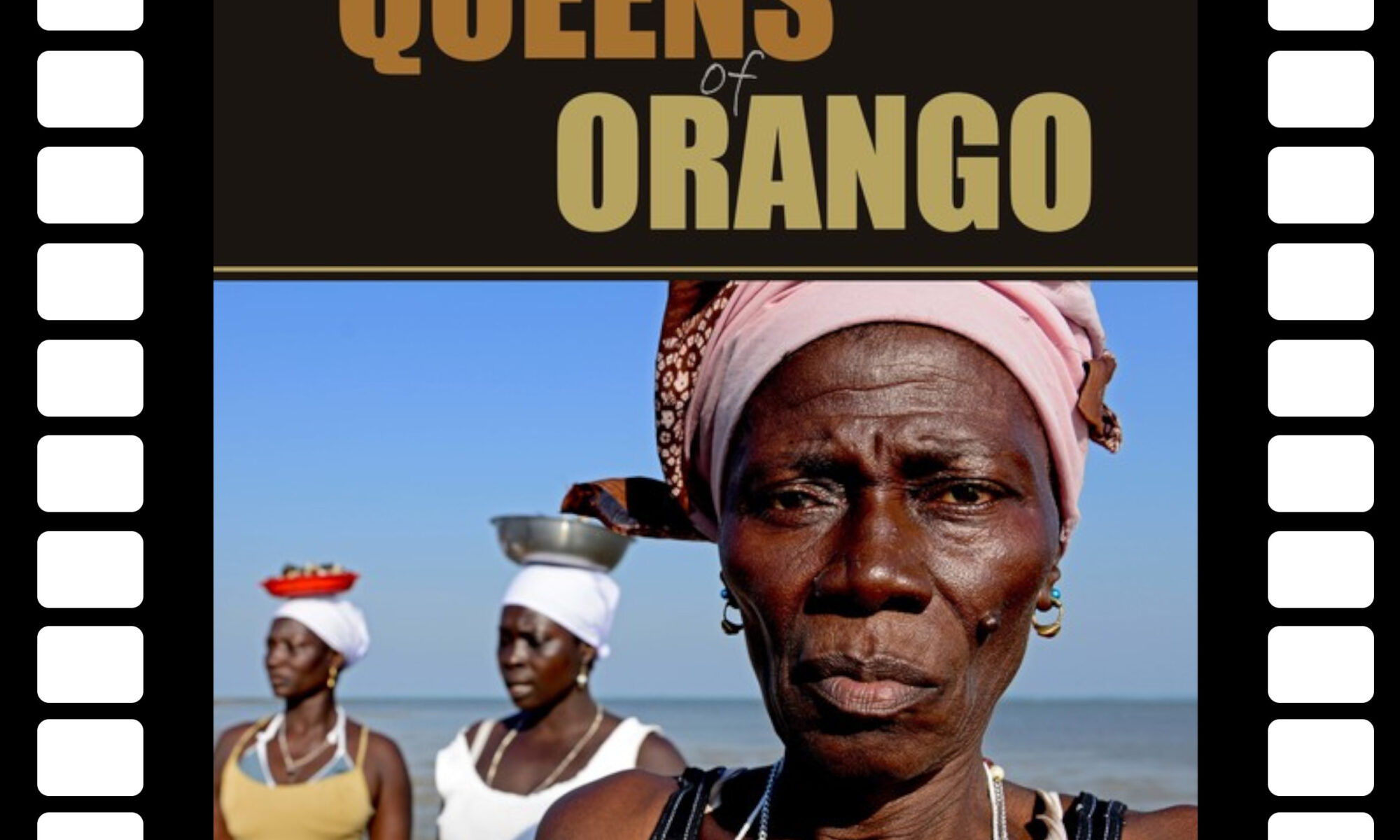 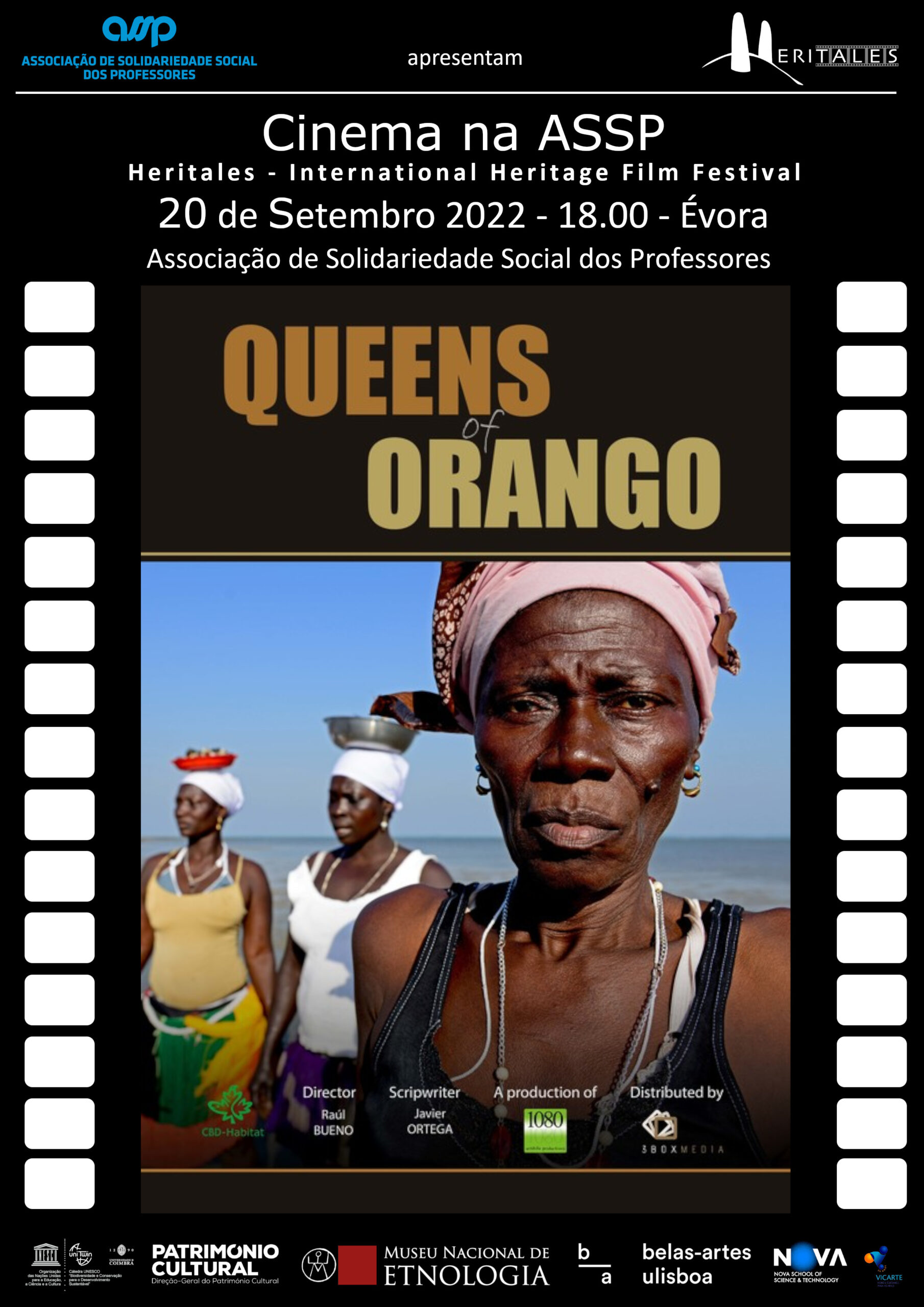 The Festival Heritales is honored to invite you to its session in partnership with ASSP – Associação de Solidariedade Social dos Professores, which will screen the film of the competition of the V Edition entitled Queens of Orango.

In Guinea-Bissau there are islands where a very special people live, the Bijagós. They live in harmony with nature, taking from it only what is necessary for their survival. Their deep spirituality marks their lives with rituals leading to the acquisition of knowledge from their ancestors. Especially in Bijagós society, women are the protagonists. They decide how to manage the crops or punish crimes, they are the priestesses of the temple, who manage to communicate with the gods, with the forces of nature and the spirits of the dead. The woman is feared and respected.
This documentary focuses on the lives of women in Eticoga, the main town on the island of Orango.

More Info about the film